The origins of the name Corno di Rosazzo 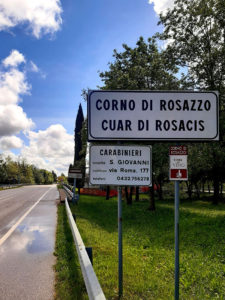 The origins of the name Corno di Rosazzo

Often the origin of a name comes from features of the place or activities that were carried out there in the past. Let’s find out which one is behind Corno di Rosazzo.

There are several hypotheses about the word Corno: the first is that it derives from the name of the Corno stream (from the Latin Cornu). It has its source at Spessa, at the confluence of the Rio Chiarò and Rio Rug, crosses Corno di Rosazzo and Dolegnano, and then entrusts its waters to the Judrio river at Chiopris-Viscone. The name of the stream is probably due to its curves and loops. The second hypothesis has more remote origins. In some writings dating back to 1211, we find the wording in loco qui dicitur Cornium (in a place called Cornium), testifying to the fact that more than 800 years ago there was a place called Cornium, later modernised into the current Corno. Other hypotheses take into account the reference to the cornel tree (from the Latin cornus), a spontaneous fruit tree, and the Latin word cornium, which means cornelian cherry, so Corno di Rosazzo could mean corner of the roses, where the Latin rosaciu refers to roses.
The Municipality’s coat of arms confirms this interpretation: “Azure, with a silver cornucopia set in a band and pointing downwards, from which red roses with green leaves emerge.” It is no coincidence that where the rose grows well, the vine is good: the wine-growing activity in the area is renowned, although not directly linked to the etymology of the name.

This website uses cookies to improve your experience while you navigate through the website. Out of these, the cookies that are categorized as necessary are stored on your browser as they are essential for the working of basic functionalities of the website. We also use third-party cookies that help us analyze and understand how you use this website. These cookies will be stored in your browser only with your consent. You also have the option to opt-out of these cookies. But opting out of some of these cookies may affect your browsing experience.
SAVE & ACCEPT